What My Induction with an Epidural Delivery Was Like 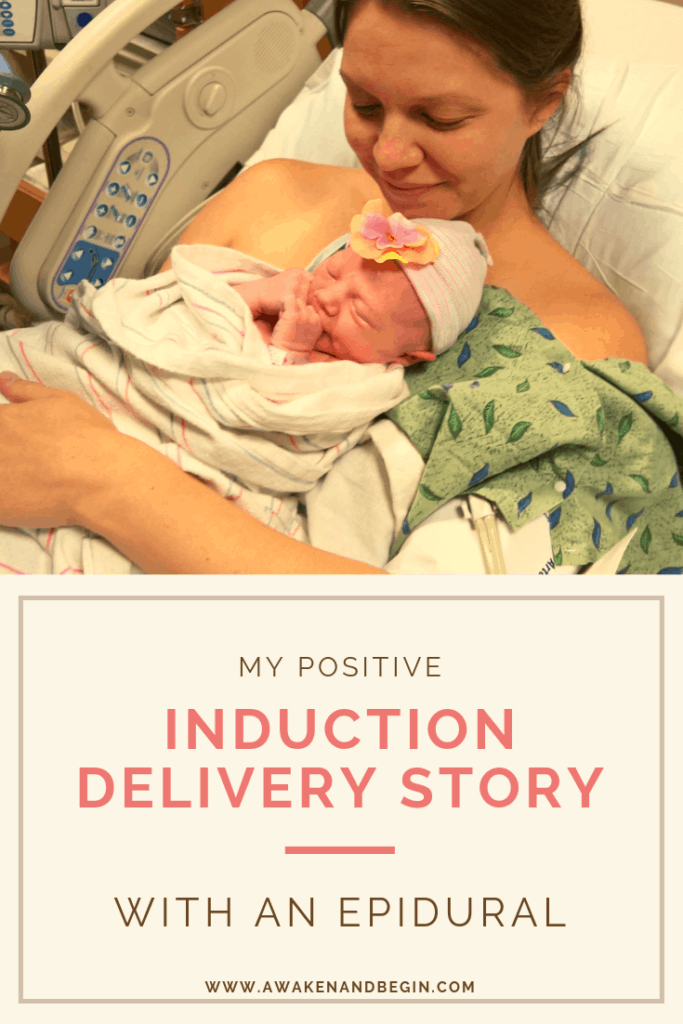 Two months ago, my husband, Michael, and I had our first baby: a beautiful girl named Claire. I have so much I want to share about my delivery experience and life with Claire. I figured I would start where it all began: with her entry into the world.

Towards the end of my pregnancy, I became obsessed with how I would manage to get Claire in There, out here. Most of what I learned about labor and delivery came from my poll of friends who have given birth, YouTube, and one birthing class.

I pretty much had a dream labor and delivery. I could not have anticipated that it would go so well. Immediately after Claire was born our doctor (Dr. Apigo) was telling us we should share our story because the good stories aren’t always shared. I am happy to share and also wanted to record the details while they’re still fresh in my mind.

I first want to say that I know how lucky I was to have had such a near-perfect experience and that I’m not sure I had all that much to do with it in terms of healthy pregnancy habits. There are so many things I would have liked to have done, like go to prenatal yoga classes, go for a walk every day, eat healthier, etc.

I did some prenatal yoga videos on YouTube at home, but I never once attended an actual class. I hope to do that with the next baby though! I also ate way too much cheesecake, especially in the end when it was too easy to rationalize to myself that it didn’t really matter since I was already huge.

During the first trimester, I pretty much subsisted on cookies, graham crackers and peanut butter, and Zevia ginger ale. The thought of chicken, eggs, or anything classically protein made the nausea worse than it already was.

All my bad habits aside, I believe what helped me the most, in the end, was my mindset. Fortunately, I went all the way to 40 weeks, so I had plenty of time to think about how I wanted this experience to be. Not really knowing much about how it would actually go, I tried my best to strip away all the chaotic images of labor I had learned from TV and movies throughout my entire life and to imagine the opposite: a peaceful experience from start to finish.

Towards the middle to the end of my pregnancy, I started watching labor and delivery videos on YouTube. I only watched a few non-peaceful stories before I swore off watching anything that wasn’t what I wanted to experience. So I started searching for “peaceful labor and delivery stories”. I chose to not indulge in any videos with words like “nightmare” or “traumatic” in the title.

After realizing that I could have a peaceful experience either way, I started seriously weighing the pros and cons of the epidural. We attended one birthing class at a natural childbirth center in Phoenix. I liked the idea of getting our birth education from a natural birth center, even though we chose to have our baby in the hospital.

I got this idea from a friend and was so grateful to her for sharing her experiences. While we weren’t comfortable leaving the safety net of the hospital, I liked getting a window into the natural birth experience. I also liked that the class wasn’t judgy about the epidural and that it actually recognized a place for it in certain situations.

Around 35 or 36 weeks I was surprised when Dr. Apigo told me I was 3 cm dilated. At first, I thought this meant we would be giving birth any minute, but slowly came to realize that it didn’t really mean much in terms of predicting labor onset. It did mean my body was getting ready, which gave me some reassurance.

About a week before my due date, I was 4 cm dilated. At that point, Dr. Apigo was starting to talk induction if we lasted to 40 weeks. We were resistant to the induction, mostly because pretty much EVERYONE we knew had strong feelings against it because of their own bad experiences or bad stories they had heard. But my doctor was very strong in her recommendation that we induce the day after my due date because of my age (35), and in the end, we agreed with her that it was the right thing for us, but decided to tell as few people as possible until after the birth.

Once we settled on the induction date, that solidified in my mind that I would get an epidural. I decided we were definitely already going opposite of natural, and I also knew that the induction could potentially intensify contractions and decided not to risk my possible inability to handle the pain once it was too late to get numb.

Friday night (June 9th), our last night before Claire (meaning the last time I slept through the night, so far!), I took a bath and went to bed. We got a call early the next morning that the hospital was ready for us and headed out around 7.

We bypassed the triage room experience and the hospital seemed pretty empty while we were checking in. Already a peaceful start!

Once we got to the delivery room, I got in my hospital gown and there was some hustle and bustle for the first few hours while they got everything situated to start the induction. The worst parts about the whole thing were the placement of the IV and getting the epidural. And both of these experiences weren’t all that bad. 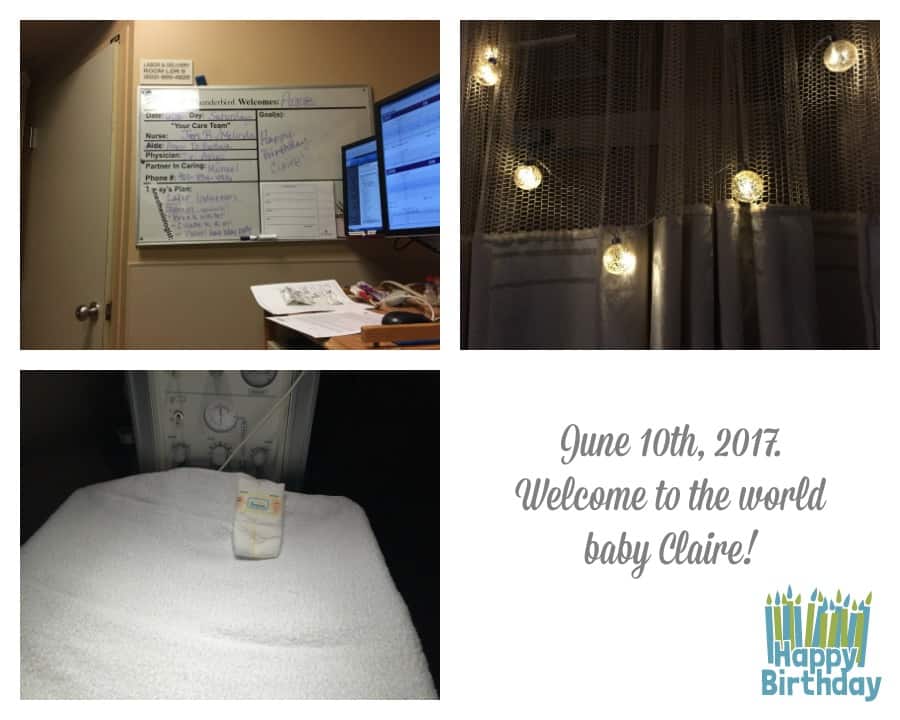 During the IV placement, I kept my eyes shut and breathed deeply. My nurse, Jen, wanted to read me some hospital info to distract me, but I was glad that I told her I wouldn’t be listening and that I was going to focus on breathing deeply instead. I felt like this really helped me because if she talked the whole time I don’t think I would have felt as calm as I did with the quiet in the room.

Once the IV was placed, the excess staff started to clear out and we turned off the overhead lights. We had brought some battery operated string lights we used for camping and put them up in the room for ambiance (another tip from a friend that I loved!). The low lighting made all the difference for me. It kept me calm.

I flipped through channels on the TV and found a Will and Grace marathon that made me really happy. I hadn’t seen the show in so long and it was easy to take naps to. Michael set himself up on the small chair next to the bed and had his computer so he could do his own thing. He watched a movie with his headphones and it honestly felt like a normal day. That was exactly what I wanted: minimal drama and keep things as normal as possible.

Throughout the whole thing, I decided to feel as if I were in my happy place, which at the moment was sitting at a coffee shop and reading a book or writing…while it’s raining outside and cozy inside. When I had my eyes closed and was breathing deeply, I would feel the good feelings of doing something I love.

When the anesthesiologist came in to place the epidural a few hours later, I sat up and closed my eyes and went to my happy place while breathing deeply. There was one moment during the epidural placement where it felt weird and not in a good way, but that passed and everything started to feel good again.

I felt a few very mild cramps in the hours leading up to the epidural, but it was by far not the worst pain ever, as I would have always thought it would have been. I pretty much napped through my entire labor.

Once the epidural was set, I started to lay back down to wait for Dr. Apigo to come in and break my water. I told the nurse it felt like something was happening, and she informed me that my water broke!

My ‘Going for the Record’ Delivery

Shortly after the epidural, I was 5 cm dilated. Dr. Apigo told me to go to sleep, which I did. I figured we would be there for 5 or 6 more hours because I assumed we had about an hour to go per cm based on what I had learned.

About an hour and a half later, I woke up to my nurse saying she thought the baby might have dropped more so she wanted to check. It turned out that I was 10 cm dilated and she said we are going to start pushing!

My whole body started to shake like I was shivering, which I thought was really weird. Everyone said it was because I went from 5 to 10 cm so fast and it was my body getting ready to have the baby. So I went with it and did my best to breathe deeply to calm down the shaking.

Dr. Apigo explained how to push for about 2 minutes while she put her surgery booties over her sandals. I really couldn’t believe everything was happening so fast. She sat down on her stool and was talking about the color of the baby’s hair. She said, “I’m seeing like a dirty blonde.” That was crazy to me that she could see hair!

I had talked to friends and had some idea of how long this pushing could last and also knew that I had some control over how long it took. I decided to go for it and give it my all. I really just wanted to get it over with — as in I wanted the relief that it was over and everything went smoothly and the baby was safe and healthy.

Dr. Apigo said I was such an excellent candidate for induction, which she had started saying a week before in her office. She pointed at Michael and said “I’m scared for you if you guys don’t induce next time. You could very possibly have a freeway baby!” I think she said “freeway baby” like three times, and was smiling and laughing the whole time. And here I am pushing a baby out, smiling and laughing right along with her.

Michael was standing on my left, holding my leg, Jen was standing on the right, holding my right leg, and of course, Dr. Apigo’s smiling face was in the middle. They turned on some bright overhead lights but I still remember the lighting being peaceful. All three of them were smiling and cheering me on, which gave me even more motivation to give it my all.

I ended up pushing for a total of 5 minutes over 3 contractions. I did not feel a single thing, except I’m pretty sure I could tell a tiny baby was coming out right at the end. On one of the last pushes I said to Dr. Apigo “I don’t want to say it…!” and she, with a huge smile on her face, said, “you can say it!” I didn’t want to jinx it, but I thought this was too easy. And she reassured me that there was nothing to worry about and we almost had the baby out in the world safely.

Welcome to the World Baby Claire 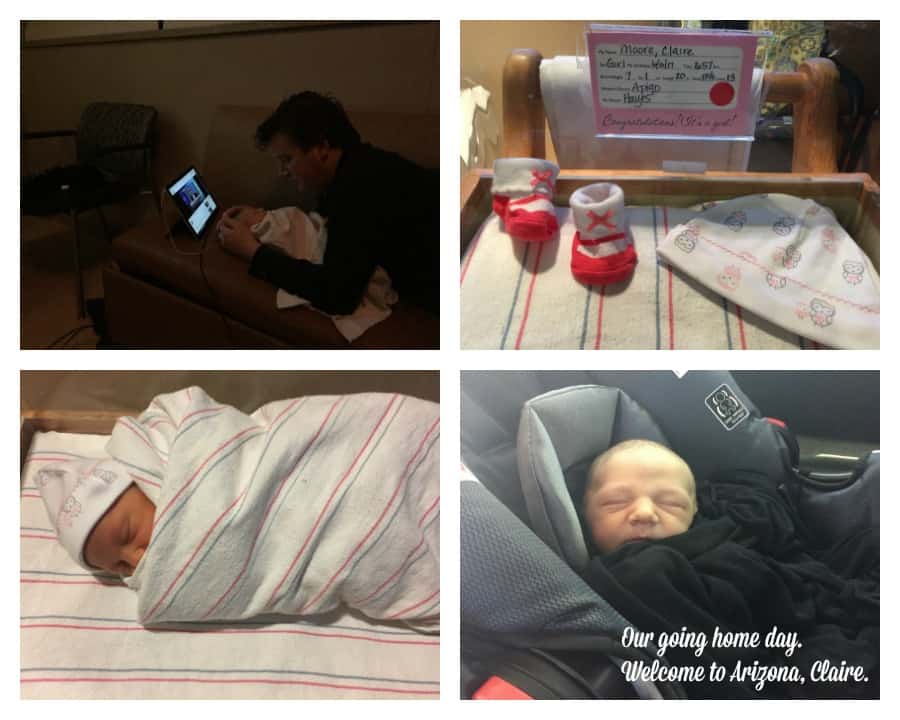 The next thing I knew, she was putting this adorable little chipmunk-looking baby up on my chest. At some point, I had started crying almost automatically because I was so happy, relieved, and in disbelief of the whole experience. I looked over and saw Michael wiping tears from his eyes. We are so grateful to have this really awesome new person in our lives!