Breastfeeding for the First Time: 5 Things I Wish I Knew 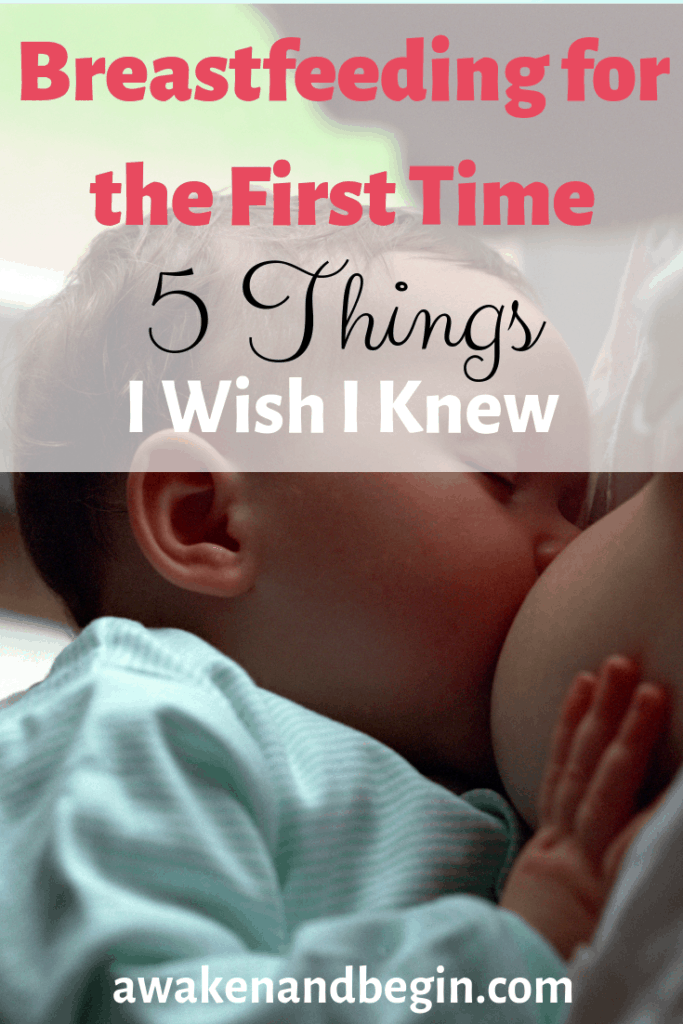 I think everyone who struggles with breastfeeding went into it with the belief that it would be easy. Second nature. At least I did.

A little over a year ago, I made it through breastfeedîng for about the first month of our first baby’s life. It’s a fuzzy memory of milk spilling everywhere in the middle of the night while a small, unsatisfied person screamed at a sleep-deprived me.

1. Learn What You Can About Breastfeeding While Still Pregnant

During my first pregnancy, I visited a lactation consultant and got a one-hour crash course on breasfeeding. This woman was incredibly knowledgeable and a lot of it went over my head, but I was proud of myself for at least getting some exposure to the world of breastfeeding. As helpful as she was, I could have benefited from reading about other people’s real life experiences. It might have sunk in better. One of the real life lessons I probably would have benefited from learning ahead of time was:

Don’t Let Anyone Pinch Your Nipples!

It isn’t necessary! I think my consultant had briefly talked about how to help get the milk out and showed me a video (sans nipple pinching), but having never done it before she might as well have been speaking a different language. When about 14 different nurses pinched me unnecessarily during our first hospital stay, I didn’t know any better to tell them to stop (without crying).

This time around, I liked our first postpartum nurse, and she seemed like a sensible person, so I asked her to help me – she did the same thing! As soon as she went for the nipple pinch, I told her I didn’t need any help and figured out how to get the colostrum out by myself. I was proud of myself and increasing my breastfeeding confidence already.

Plan to have your baby skin-to-skin for at least the first hour following birth. I had heard about the importance of this hour before giving birth to our first baby, but wanted my husband, Michael, to get the chance to hold her right away too. I handed her off and didn’t stay focused on getting her to breastfeed and have always wondered how that might have influenced our breastfeeding success.

I made sure Emma remained on my chest during the first hour after her birth. I had discussed this with Michael throughout my pregnancy, and he agreed that anything we could do to improve my success with breastfeeding this time would be well worth it. And it paid off! Emma got in a full feeding right away in the delivery room. I felt relieved that it seemed to be working out this time.

I was so proud of that first feeding, but then didn’t have it so easy the rest of our hospital stay. One nurse commented that this is common with newborns. They have the energy right after birth to feed, but then are so sleepy within the first 24 hours that breastfeeding may not go so well initially. I now know that this isn’t necessarily a predictor of breastfeeding success.

It also clicked for me this time that I don’t even have milk yet so of course the baby isn’t going to be feeding like a champ during those first days. It’s a lot of work to get out a teeny bit of colostrum and if they are dozing every 5 minutes there isn’t much time to get the motivation to keep going. I told myself that I would keep the faith until there was actual milk and sure enough she caught on right around that time (a few days after we got home from the hospital).

4. Pumping at the Hospital May Not be Necessary

I am by no means a lactation expert, so I probably have no idea what I’m talking about, and I know that each situation is different. Some women have a medical need to pump for their babies while in the hospital. But for my situation, I discovered that it wasn’t necessary.

I brought my own pump this time. I had this on my hospital bag checklist because the hospital uses the Medela brand, but my Spectra brand is more gentle.

I attempted to breastfeed Emma each time, then if I was unsuccessful my plan was to pump and give her formula if necessary. I ended up pumping once during our hospital stay. After producing one whole whopping milliliter after 30 minutes (that basically stuck to the sides of the pump parts and bottle anyway), I realized that it wasn’t worth the effort.

On our last day, a hospital lactation consultant confirmed that hand expression is more effective than pumping during those first days. I was piecing together that our hospital was more into teaching us about what feeding options existed than being upfront about the reality of the limitations during those first days. I was glad that I had figured it out on my own this time!

Giving your baby formula in the hospital does not ruin your breastfeeding chances. Although we had never discussed it, both Michael and I had this same idea in mind that our first baby wasn’t going to get formula. We were both so terrified that if we gave her a bottle she would for sure never latch, and I think we got this from hearing snippets of friends’ experiences.

We decided that next time we would rely on formula if breastfeeding wasn’t working that great initially, and agreed that this didn’t mean we were giving up on breastfeeding. Emma did get formula in the hospital and I asked if I could take home extra bottles in case we needed them. She hasn’t gotten a sip of formula since we got home because we haven’t had to rely on it. But if we end up giving her formula at some point again, we are fine with that.

Breastfeeding is a personal experience that goes public. EVERYONE has an opinion about it! And if it works out, you might be doing it while walking through the airport one of these days. I will always, always, always remember my number one favorite piece of advice from a friend while I was pregnant for the first time:

Don’t Let Anyone Tell You How to Be a Mom

I will admit that I haven’t followed this advice as strongly as I would have liked, but it has been the best, most empowering thing I ever heard. And I needed to hear it, because I have received advice and criticism that I never would have expected or dreamed I would.

As for breastfeeding: I am happy to report that it’s working out so far for me and Emma. And if we get to the point where it’s no longer working out, I’m okay with that. And if I see a mom giving her baby formula, I will understand that she has reasons that I may not be aware of and that she is doing the best she can for her baby (and it’s simply none of my business anyway!).

Do you have any breastfeeding wisdom to share? I’d love to hear it!