This past weekend, Ignite Yoga celebrated their two year anniversary with a series of special free classes at their studio in Goodyear, Arizona.

Ever since moving to the area, one of my goals was to find a local yoga studio that I could go to on a weekly basis as a way to expand my current yoga practice beyond Hulu and YouTube, and hopefully make a few yoga friends.

The studio in Goodyear opened up a few months ago, but the company has been in business for two years, starting out of a room in the owner’s house (how could anyone not be inspired by that!?).

There are a few other studios in the area that I had driven by but didn’t feel crazy inspired to visit. When I saw Ignite this past month within walking distance of our house, I was so excited!

Glow in the Dark Yoga 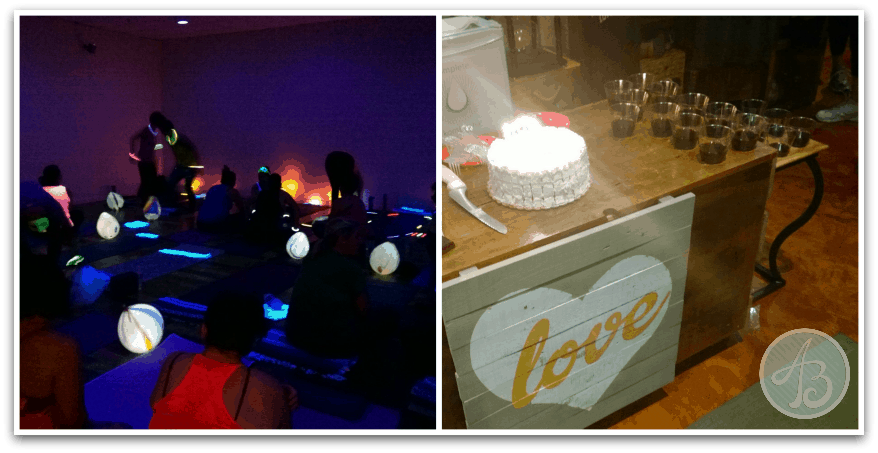 The weekend kicked off with free “Glow in the Dark Yoga” on Friday night. After seeing a picture and reading the description on their website, I figured it looked fun and signed up.

Next to taking class from Tara Stiles at The W Hotel pool deck in Scottsdale several months ago, this was my coolest yoga experience ever! The music had a cool, lounge-y, club-y vibe. While the essential spiritual elements of a yoga class were still there, the class had a lighthearted, fun feel to it. We even played a bit of yoga volleyball with the glow in the dark balloons at one point!

I would love to do glow in the dark / cosmic yoga again, and I think it would be so cool to have this class as an option every Friday evening. Such a fun, upbeat, yet relaxing way to kick off the weekend on the right foot.

On Saturday morning there was an event for kids which I didn’t attend, but I love that Ignite Yoga addresses the need for yoga from a young age through their kids room, after school yoga program, and other events. Yoga Ignite believes that yoga is for all ages, and I couldn’t agree more!

The next event was a free restorative yoga class on Saturday night. I have done one other restorative class in the past but didn’t know that was what it was called. I have recently been doing a restorative yoga video on YouTube by Sarah Beth Yoga, and loving it. This video is less than 10 minutes long, which is perfect when you don’t have much time in the morning but still want to do something good for yourself to start the day.

From what I can tell, restorative yoga usually uses the wall as a source of support for some of the poses. We did some legs up the wall moves towards the end of class. This class was so incredibly meditative and relaxing.

Wine and snacks were also served after this class.

I loved waking up Friday and Saturday morning this past weekend and getting to look forward to yoga all day.  Ignite Yoga exceeded any idea I might have had about what was in store for the weekend, and I ended up leaving on Saturday night with a $40 for 40 days pass and a cute new yoga shirt.

The next event at Ignite Yoga that I will be attending is the Thai Yoga Massage workshop on February 13th with my fiancé for Valentine’s Day. We have never attended a massage class before but I have always wanted to check one out. And this gets him to the yoga studio!

Ignite Yoga also has a unique coffee and tea bar, where they serve a variety of teas and hot and iced coffee. Students can even indicate on the sign in sheet what type of beverage they would like after class and the receptionist will have it ready when class is over. Such a great idea!

I am so happy to live so close to such a great yoga studio. I haven’t called a yoga studio home since my Bikram yoga challenge several years ago, and honestly this type of yoga is way more fun! I am excited about attending upcoming classes and events at Ignite.

If you are in the area, I highly recommend checking out Ignite, even if you have never done yoga before.

Do you have a home yoga studio? Even if you have never tried yoga but always wanted to (which I hear a lot when yoga comes up), do yourself a favor and try out a studio nearby. Most places have deals for new students and can help you decide where to start if you are a yoga newbie. I wouldn’t give up my relationship with my yoga mat for anything, and I hope everyone who likes or tries yoga feels the same!

Share
Pin
0 Shares
« A Moment of Clarity: Seeing How the Pieces Fit Together
How To Take Control of Your Kitchen Part 1: Countertops »

Meditation site on the morning of Claire's birthda

Claire Bear is 4! My husband can make an amazing b

Enjoyed the backyard this past weekend ❤️ •

Because it does 💗 We are far from perfect, but

This is Shenanigans - Gans for short. He's also no

Trying to get in more pictures ❤️ Thanks @busy

The other day the first thing Emma asked for when

These WERE my "skinny girl jeans". I realized this

Welcome to the other side of our kitchen island! O

- Zenification of Seasonal Ties - My husband has

New yoga mat storage for me and the girls ❤️ I

Got this corner of the room organized (again). I w

Happy Saturday! This made me so happy ❤️ There

How could I forget that I LOVE cleaning? All this

The blue may or may not have spilled everywhere, b

If you have an iPad and an Apple Pencil, I feel st